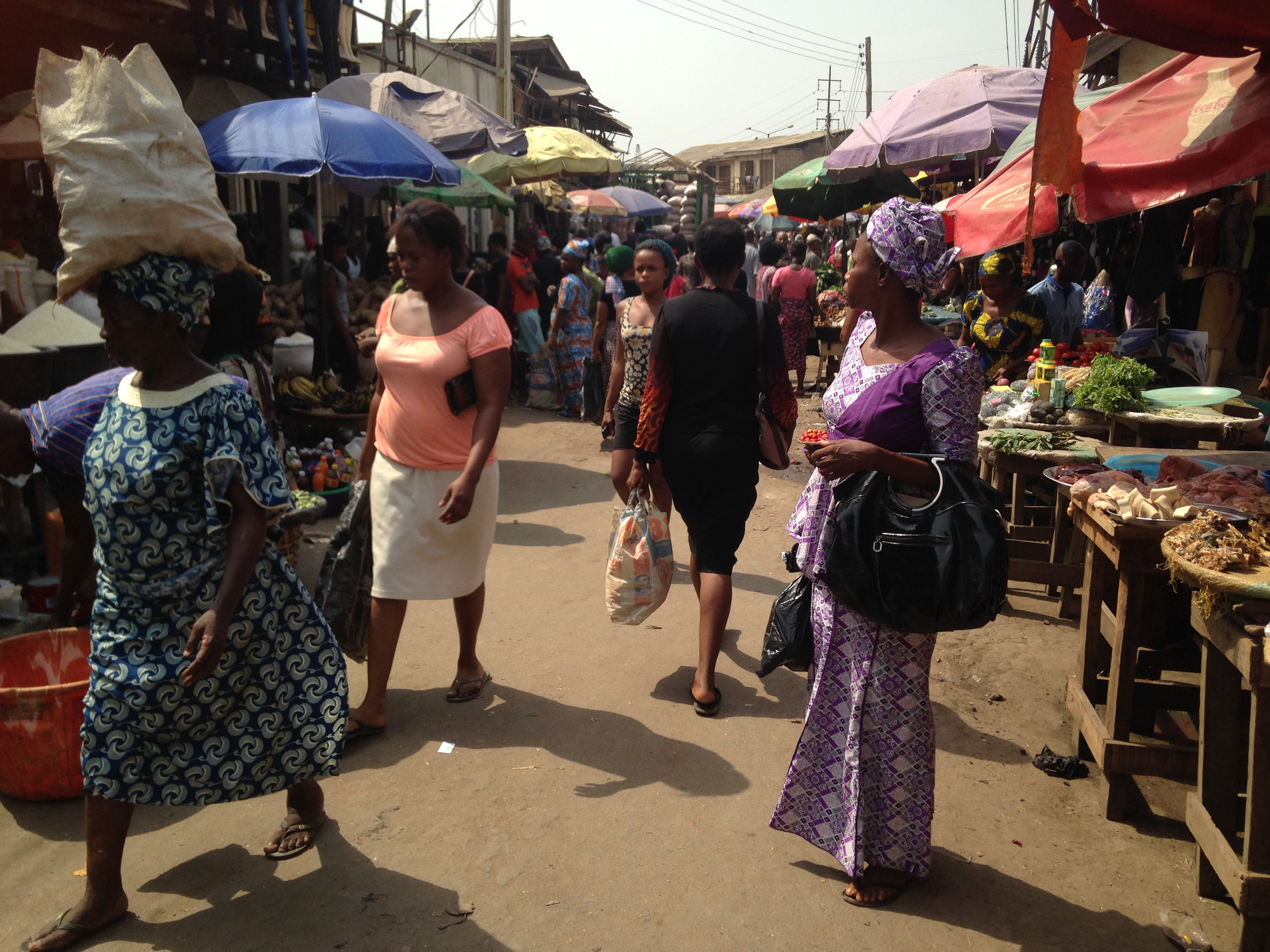 In this second edition of The Global Communiqué’s ‘Grassroots Reporting’ section, we take you – the reader – to Lagos, Nigeria, specifically to the vigorous and energetic Ikotun Market – a marketplace in the Alimosho Local Government Area of Lagos state. The Global Communiqué engaged in conversation with three different market women.

Nigeria, one of Africa’s largest economies, slipped into an economic recession in 2016. Nigeria was particularly hit the hardest by the decline of global oil prices which make up 70% of government revenue. Various policies were put into place in 2016, with the aim of propping up the Nigerian economy; however, the economy currently remains in a quandary. The most recent data from Nigeria’s National Bureau of Statistics reveal that inflation has now hit 18.55% (an increase of 0.07% from the 18.48% inflation rate that was recorded in November 2016). The food index also rose from 17.19% to 17.39%. Notwithstanding Nigeria’s current economic difficulty, the World Bank’s January 2017 Global Economic Prospects report forecasts that Nigeria will rebound from the recession and grow at 1% .

Despite all these figures and reports, what does all this mean for ordinary citizens going about their daily lives: this is what a late morning conversation with Ikotun Market’s small business owners illuminated. These conversations consisted of discussing life in Nigeria before and after the country’s economic recession, their views and opinions on Nigeria’s political landscape, as well as whether they would like to be involved (in some capacity) in the policy-making of their country. The interview was conducted on Tuesday, January 10th, 2017 and has been lightly edited and condensed for clarity.

Q: Good morning. Please tell us your name and what you do for a living.

Esther: My name is Esther and I am a business woman. I sell “okrika” – second-hand clothing.

Victoria: Good morning. My name is Victoria and I own a boutique business. I sell ladies’ wear – gowns, skirts, trousers and jeans.

Q: Have you always sold items here in Ikotun Market?

Grace: I did not always live in Lagos. I was living at the village. I only moved to Lagos when my husband died. Following the death of my husband, I was suffering in the village with my 6 children. So that is when I decided to move to Lagos with my children and start this business of selling dry fish. 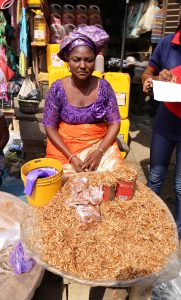 Victoria: I used to live in Aba, in Abia State before moving to Lagos. I was an employed woman in Aba – I was not engaged in a business. I moved to Lagos when my husband moved to Lagos. I have been selling here for 6 years now. I lived in Aba for 10 years.

Q: How has life been for you ever since Nigeria entered into an economic recession?

Grace: Life has really changed for me and my family. I did not know it could get like this. For example, this dry fish that you are seeing, I used to buy one packet to sell for only 8,000 naira [approximately US$25]. But today, the same packet of dry fish is 30,000 naira [approximately US$95]. Everything was low; now everything is high. As a widow, things are very difficult, school fees are high. My oldest child is 29 years and my youngest child is 14 years.

Esther: During the time of Jonathan, okrika was cheap a bale was between 25,000 naira and 32,000 naira [approximately US$79 and US$100]; but today with Buhari okrika is 100,000 naira [approximately US$317]. Things used to be cheap for market women, now it is very expensive. That is not the only thing: since Buhari became president, the customs have started seizing second-hand clothes on our back from Cotonou. They say we cannot bring the clothing to the market. They do not give a reason, besides that the clothing is contraband. They do not give us alternatives, they just seize the clothing. This is making it very difficult for us market women. During Jonathan we were free and things were better. I used to eat freely: me and my family used to afford to buy chicken and we used to cook using four scoops of rice. But today, under Buhari, we cannot afford to eat chicken, it is too costly. Instead, we eat dry fish and cook using two scoops of rice. 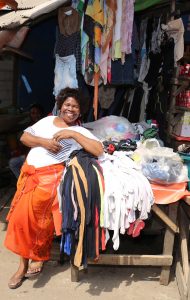 Madam Esther stands beside the ‘okrika’ she sells in Ikotun Market, Lagos, Nigeria

Victoria: The present economic situation has not been easy at all. People are not buying clothing the way they used to. Life was better before the current economic situation. For example, in previous years, at Christmas time people used to come here and buy a lot of clothing, without a care on how much they were spending. But this past Christmas (2016), people hardly bought things – people cannot afford clothes. I want to switch over to selling food stuff – like rice and beans. People cannot do without food; but things like clothing, people can survive without them, so you get fewer buyers in situations like this.

Q: Do you blame this difficult economic situation on the current president, President Buhari?

Grace: Everything was low, now everything is high. Gari [a type of food] under Jonathan was 200 naira but today under Buhari, it is 800 naira. Now people are suffering.

Esther: Things used to be cheap for market women. I cannot eat the things I used to eat. People who said ‘change’ was coming are now regretting. In this market, you cannot see someone come out to publicly say that they voted for Buhari.

Victoria: I don’t want Buhari for another term.

Q: If your opinion was asked on how the government should improve the current economic situation, what would you say?

Grace: As a person, you don’t want to use your mouth to demand things. But what I can say is that people are suffering.

Esther: The customs should find other ways to seize contraband items, a way that does not affect the poor market women who rely on selling okrika for their livelihoods. The government should also give assistance to women like me who want to enter the farming business.

Victoria: If the government could give funding to small business owners, it would help. The government should also have a way to hear the voices of the poor. 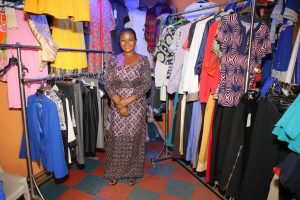 Madam Victoria stands in her boutique where she sells ladies wear

Q: Now that America is getting a new president, soon to be President Trump, is there anything in particular you would like to see him do for Africa, specifically Nigeria?

Esther: I do not want any president from any rich country to borrow Nigeria money – borrowed money will just get Nigeria deeper into problems because to pay that money back will become a problem.

Victoria: America can help us with enforcing the rule of law.

Q: Thank you for all of your time.

As the World Bank has made a rather promising forecast for Nigeria’s economy in the year 2017, what remains important is to remember that these economic figures that are frequently hurled about affect real people who would also like to be involved – in some capacity – in the decision-making of their own country. Bearing in mind the rise in populist movements across the west, it is important to take stock of what was learnt in 2016, particularly as it relates to amplifying (and not disregarding) the voice of the general populace and those at the grassroots. In this case as Nigeria climbs out of its economic valley, the Nigerian government ought to create more inclusive and more effective policies for the benefit of the general populace. In crafting such policies, it is fundamental to have community participation, in the form of incorporating the interests (and preferences) of the underprivileged groups, when formalizing policies in the higher echelons of government.

Banerjee and Duflo in their book, Poor Economics: A Radical Rethinking of the Way to Fight Global Poverty state that “if we listen to [those at the base of the pyramid] and force ourselves to understand the logic of their choices […] then we may be able […] to construct a toolbox of effective policies […]”. The creativity of small business women in going about the daily endeavours has the potential to bring transformational impact when rolled out on a larger scale, only if their voices are taken seriously.

Note: The interview and the images taken were done with the permission and consent of the interviewees.